With the arrival of a new year, the major Falun Dafa book Zhuan Falun has reached its 20th anniversary. This book originated in China and has been translated into 38 languages, deeply affecting millions of people in more than a hundred countries around the world. The following tells the story of Zhuan Falun spreading for twenty years worldwide. 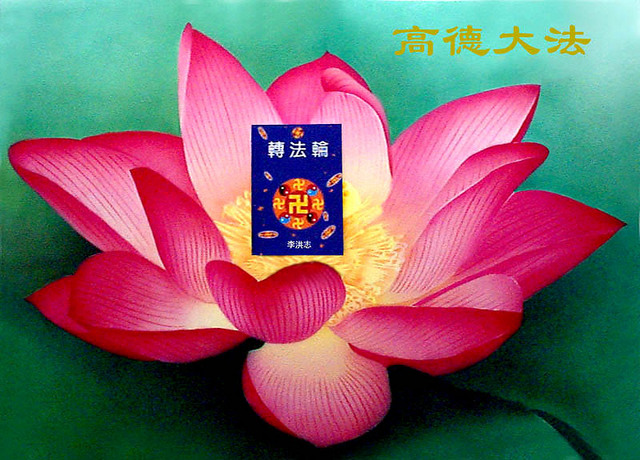 The book sitting in the centre of the lotus flower is the core text of Falun Gong, Zhuan Falun.

On January 4, 1995 the founder of Falun Dafa, Mr. Li Hongzhi, held a launch ceremony in Beijing for the major book Zhuan Falun. Mr. Li Hongzhi had been spreading the Fa publicly since May 13, 1992. In the first two years, 56 lecture classes were held in various parts of China. The lecture contents were transcribed into the book Zhuan Falun.

Zhuan Falun discusses Falun Gong cultivation principles in accordance with the requirements of “Truthfulness, Compassion and Forbearance” so practitioners can discipline their behaviours themselves. Media sources in China, including “Beijing Daily” and “Dalian Daily” reported Falun Gong practitioners repairing the roads voluntarily, saving other people’s lives, making donations anonymously and other good deeds.

In addition to teaching practitioners to improve their virtues, Zhuan Falun also describes the fundamental cause of disease, and it shows practitioners how to resolve them. In 1998, the State General Administration of Sports in China surveyed 10,000 incidents and found that the efficiency of Falun Gong healing and fitness was 97.9%, including many diseases incurable by modern medicine.

In early 1996, Zhuan Falun was on the best sellers list in Beijing. In 1999, there were 100 million Falun Gong practitioners in China.

Mr. Li Hongzhi brought the beauty of “Truthfulness, Compassion and Forbearance” overseas beginning in 1995. Zhuan Falun has been translated into 38 languages, and it is widely circulated in over 100 countries and regions. In 2004, Zhuan Falun became one of most popular books in Australia.

Starting from 2009 in Taiwan, every year thousands of Falun Gong practitioners make formations to symbolize the book cover of Zhuan Falun “Truthfulness, Compassion, and Forbearance”, “Falun Dafa”, the portrait of the founder of Falun Gong and other graphics. They thank Mr. Li Hongzhi for bringing Zhuan Falun to the world.

According to incomplete statistics, Falun Gong has received over three thousand testimonials in overseas countries. Liberal politicians of all levels in society show respect and gratitude towards Zhuan Falun and Falun Dafa. Jason Kenney, Minister of Multiculturalism in Canada, said, “Falun Dafa is good! Falun Dafa is good!” Member of Parliament Stephen Woodworth said, “In my mind Falun Dafa practitioner hold a special place in society. I find that what you follow is the highest realm of human civilization.”

Originating in China, Zhuan Falun is respected by various ethnic groups of all classes. However, the CCP has been persecuting Falun Gong in China since 1999, and it distorts the contents of the book. Faced with this persecution, Falun Gong practitioners have displayed unyielding perseverance for fifteen years, and Falun Gong has spread around the world.