April 20, 2016 | Members of the Falun Dafa Club at Columbia University in New York City held a four-day poster exhibition on campus to talk to people about the persecution of Falun Gong (also called Falun Dafa), a spiritual practice that has been practiced in China since 1992. Many faculty and staff members stopped by to learn more about Falun Gong.

Students from China also talked to practitioners about the current situation of Falun Gong in China. Many of them chose to quit the Chinese Communist Party and its affiliated organizations to state their objection to the brutal treatment of practitioners by the communist regime. 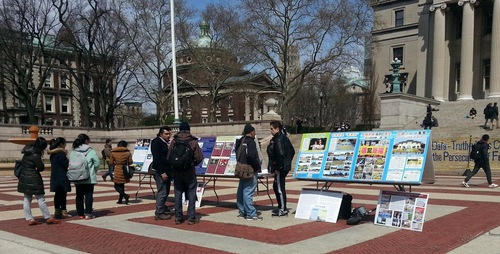 Posters displayed on Columbia University campus drew the attention of many passersby.

On campus, the gold and blue Falun Dafa banner with posters told stories of the suffering that practitioners have endured in the persecution. They also revealed, in both Chinese and English, the state-sanctioned harvesting of organs from living practitioners who had been incarcerated for their faith. Despite the chilly and rainy spring weather in New York, many passersby came and signed the petition to protest and call to end the organ harvesting crimes taking place in China.

“It is exactly because of our fear of speaking up against the government that resulted in [Falun Gong] being persecuted for as long as 16 years,” the practitioner continued. The student agreed. 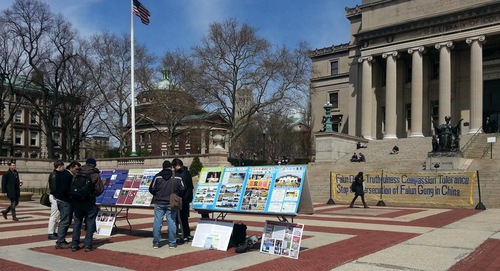 Posters displayed on Columbia University campus drew the attention of many passersby.

An older woman read the posters and signed the petition against forced organ harvesting. With tears, she held the hand of a practitioner and said, “You have my full support.”