On the first day of his trip to Washington D.C., Chinese president Xi Jinping met with a call to bring the main culprit of the persecution of Falun Gong to justice.

Xi arrived in Andrews Air Force Base on March 30 for the two-day Nuclear Security Summit. Falun Gong practitioners from Washington D.C. held up banners in front of his hotel, which read “Falun Dafa is good” and “Bring Jiang Zemin to Justice.” Jiang, the former communist head of China, launched and directed the 17-year-long persecution of Falun Gong. 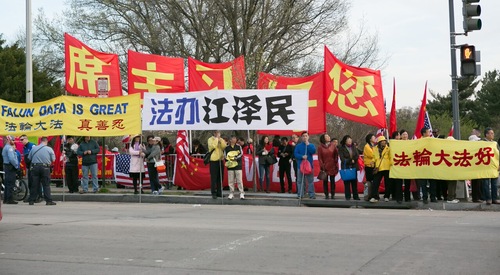 Before the Obama-Xi bilateral meeting on March 31, the chair of the Congressional-Executive Commission on China (CECC), Congressman Chris Smith, and CECC vice chair Senator Marco Rubio, wrote to President Obama, urging him to address human rights at the meeting.

At a Capitol Hill press conference on Xi’s visit on March 29, Congressman Smith said: “If human rights are sidelined again this week in the Obama-Xi meeting—it will not only be an unconscionable abandonment of China’s best and brightest who today suffer jail, torture, and death for freedom, but it will be a colossal strategic mistake, as well.”

“The U.S. cannot meekly ‘raise’ human rights concerns when it is increasingly clear that our security and economic interests with China will not be ensured without dramatic human rights improvements and advances in the rule of law,” stated Congressman Smith.

Answering a question regarding House Resolution 343, which was recently marked up by the House Foreign Affairs Committee, Congressman Smith said that the bill seeks to help end the state-sanctioned organ harvesting in China, and that more congressional hearings will be held on this issue.

Smith suggested that the atrocious organ trade in China should also be brought up at the Obama-Xi meeting. 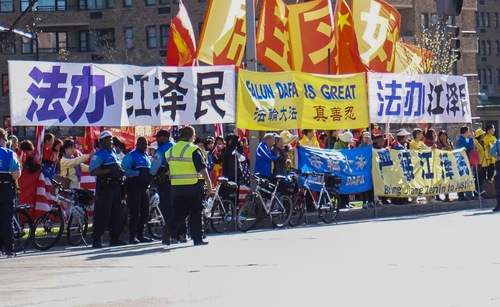 Ms. Wang Chunrong, the former CEO of an accountant firm in China, joined the appeal in front of Xi’s hotel on March 31.

Ms. Wang, who now resides in Washington D.C., had been severely tortured in China for her belief in Falun Gong.

She told the press that more than 200,000 Falun Gong practitioners have filed lawsuits against Jiang Zemin since last May. So far, more than 10,000 D.C. Residents have signed a petition to support these lawsuits.

“The signed petitions have been mailed to the Chinese Supreme Procuratorate,” Ms. Wang said. And the signature drive continues.

Government leaders from 50 some countries attended this summit. The appeals and protests outside the conference have drawn the attention of the public and the media.

(Visited 65 times, 1 visits today)
Posted in China News, World News and tagged Obama-Xi, protest, rally
← Time Waits for No OneRaising Awareness in Australia: ‘The Perpetrators Must Be Brought to Justice’ →