Falun Dafa practitioners held activities at Syntagma Square and the Athens Railway Station on the weekend of December 11-12, 2015. Athens, the capital of modern Greece, has been the centre of Greek civilization for 4,000 years.

Falun Dafa is an ancient cultivation practice, rooted in 5,000 years of Chinese civilization, and a self-improvement practice that has benefited people in more than 100 countries. Many expressed interest in learning Falun Dafa signed petitions calling to end the persecution of the practice by the communist regime in China. 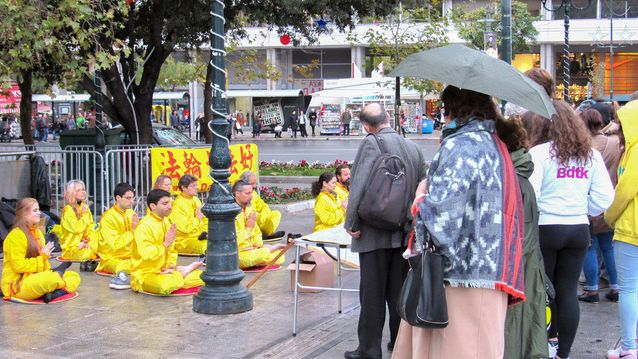 Practitioners explained Falun Dafa to passersby on December 11 at Syntagma Square, also known as Constitution Square. Drawn in by the gentle exercises being demonstrated, many people stopped to read the posters and find out more information.

“I am sorry to hear about the persecution in China,” one of them said. “It’s just too outrageous.” Many people signed petitions calling to end the suppression in China, especially the regime’s killing of imprisoned practitioners and harvesting their organs for profit.

A group of tourists from Russia were impressed by the calm and gentle exercises. “I like this! Can someone teach me?” one of them asked. A practitioner introduced her to the books and free exercise instruction videos online.

Another member in the group remarked, “I know what the Chinese Communist Party (CCP) is, because I have been through communism.” She hopes more people would join the effort and bring the persecution to an end sooner.

The next day, a couple who stopped at the Falun Dafa booth at Athens Railway Station were excited to meet practitioners. “We have practised yoga, but this seems much better, and we could feel a strong energy,” said the wife.

Many people coming from the train station were curious about the exercises and took informational materials. “It’s hard to imagine such a wonderful practice could be banned in China. Shouldn’t we all respect human rights?” said one woman. She and her friends signed petitions supporting lawsuits against former Chinese leader Jiang Zemin, who initiated the violent suppression of Falun Dafa in China. 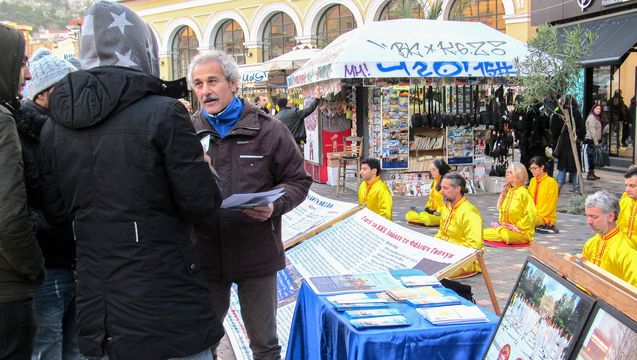 An older Chinese man chatted with practitioners for a long time as he watched the exercise demonstration. “I know the Chinese Communist Party is rotten to the core. Otherwise, who would want to leave our motherland and come overseas?” After hearing that more than 190,000 people have filed criminal complaints against Jiang Zemin, the man said that he knew the day would come for Jiang to be held responsible for his crimes.

“I think I may practise Falun Dafa one day, too,” the man said.